Nigeria man beats his pregnant wife to death after taking his pastor along to beg and bring her back home following their initial separation due to constant abuse.

The issue most married couples are facing is sometimes complicated to understand, many home has been broken as a result of domestic violence.

Women are the weaker vessel that needs to be treated well by men in married, but unfortunately some men has turn their own wife into punching bag, they beat thier wife any time a little controversy arises between them that needed to be settled amicably.

Because of this domestic violence that commonly this day alot men has become single father without wife’ probably they had a wife before and she left the man as a result of mistreatment.

The implications of domestic violence is not just attributed to broken homes but also it leds to crime, a situation where by the man beat the wife and it can result to her death if care is not taken.

Today we got a report on how a man beat his pregnant wife to death after taking his pastor along to beg her to come home following their initial separation due to domestic violence and abuse.

Prince Kelvin  a brother to the deceased narrated below: 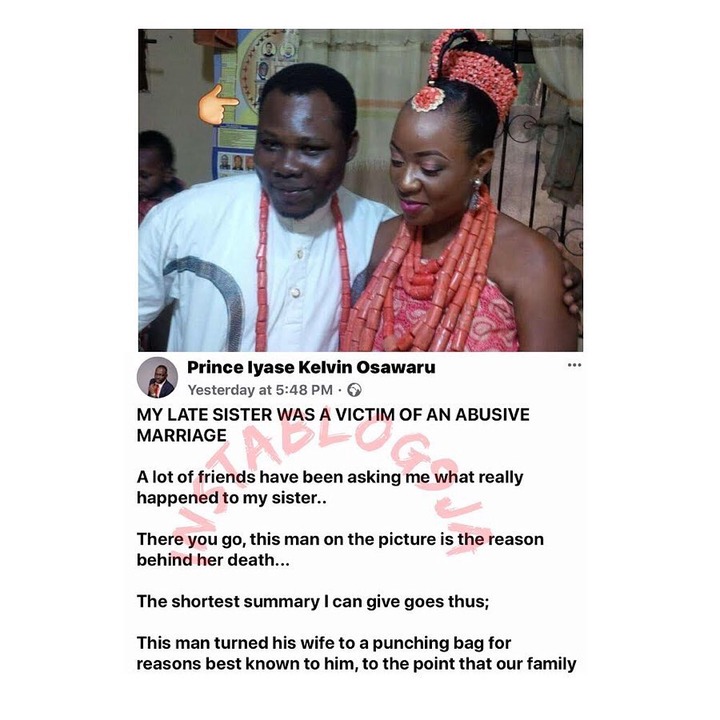 MY LATE SISTER WAS A VICTIM OF AN ABUSIVE MARRIAGE A lot of friends have been asking me what really happened to my sister.. There you go, this man on the picture is the reason behind her death.

The shortest summary I can give goes thus; This man turned his wife to a punching bag for reasons best known to him, to the point that our family

had to retrieve my sister and her two kids from him One would have thought that my sister would take that as a relief, but NO love kept finding it’s way back, she will go as far as clandestinely frolicking with him and along the line she conceived her third and last child Sometimes last year, this man came in company of his family and pastor begging to have his wife back, he won’t molest her ever again, and so my sister agreed joyously to go back to her sweet hubby not knowing that she won’t get another chance at redemption.

TO THE MATTER OF THE DAY This woman beater now killer, still beat my pregnant sister mercilessly again, hitting her stomach, to the point that unknown to her, the beating had affected her UTERUS, in no distant time precisely(2 days ago) my sis entered emergency labour and was booked for a cesarean section (CS) The baby was successfully out, that’s when complications arising from the internal injuries she had suffered started, the rest is an history too painful to even talk about, and she died eventually.

I’m sharing this personal story basically because i know that amongst those who will read this post, are ladies definitely going through this inhumane act of abuse in relationship/marriage..

This may be your last chance to leave that beast now before it is too late.. As a man, if your woman or wife does the height of unforgivable thing to you, please send her back to her parents, you paid BRIDE PRICE, didn’t pay for her life.. As for this guy on the picture, i congratulate you my brother because you don win award. R.I.P. Dear Lilian lyase Edo

A man and his wife got more than what they bargained for after they almost meet their untimely death just because...
Read more
Relationship

I didn’t inform my boyfriend i was coming to his house, when i got there this what i saw and i was speechless- Lady...

I didn't tell my boyfriend i was coming to his house, when i got there this...
Read more
Relationship

A three year old girl has demonstrated to her mother how her father put his magic stick in to her mouth...
Read more

Hushpuppi you are a Genius, you sacrificed yourself for us, I will tell my Kids about you” – Nigerian Man Eulogizes Ex-billionaire Raymond Ramoni...

Nigeria boy took to his Instagram handle eulogizing hushppupi for the brave steps he took just to eradicate poverty from his family....
Read more

Popular Nigeria Nollywood actress took to her Instagram account to advice her following , that they should never misuse privilege and...
Read more
Load more

The Special Anti-Robbery Squad (SARS) of the Lagos State Police Command has arrested nine members of the...
Read more

I didn’t inform my boyfriend i was coming to his house, when i got there this what i saw and i was speechless- Lady...

I didn't tell my boyfriend i was coming to his house, when i got there this...
Read more

When a person is addicted to alcohol drinks he or she will go extreme to do the unsual just to satisfy...
Read more

I’m in love with plenty women, I no mind marry all of them, Don Jazzy declared

Just recently, Nigeria popular producer Don jazzy decided to tease his followers after he posted a photo on his Instagram...
Read more