Meet The Pastor Who Took Over From Paul Yonggi Cho

Elderly Woman Who Died And Went To Heaven, Reveals What God Told Her

Mom of 2 Sons Beheaded by ISIS Is Proud They Refused to Deny Christ: “I Gave My Two Sons to Jesus

“How Should I Kill Him?”: Prince of ISIS Plots to Murder Christian Leader, Comes to Christ in Radical Conversion

Cross Over To The New Month With These Powerful Prayers, You Won't Have To Struggle Again

Last Day in the Month of August, Declare These Prayers For Protection and Thanksgiving to God

"The Church Is No More Respected" - Apostle Johnson Suleman (video).

Muslim Father Killed His Son, For Converting To Christianity And Refusing To Come To Islam.

Any Man Who Doesn't Maximize His Night Is Exposed For Weeping - Apst. Johnson Suleman Says {Video)

2 Reasons Why Western Nigerian Pastors Do Well In Ministry, Compared To Pastors From Other Regions.

I Tapped Something massive from Reinhard Bonnke after staying in the Same Hotel room he Stayed.

Bishop Oyedepo Condemns Christians Who Use Digital Bible In The Church

"I'm Not Angry At Those Insulting Me On Social Media" - Apostle Johnson Suleman.

I belong to a higher secret cult- Bishop David Oyedepo.

When my husband died, David Oyedepo paid the salaries of the lecturers for two years- Mrs Idahosa

Before You Send Your Child Abroad; Listen To This Warning - Bishop David Oyedepo.

Muslim Relatives Set the House Of their Sister On Fire For Converting From Islam To Christianity.

Muslim Man Attack His Brother With Machete For Converting To Christianity

2 Ways To Keep Great People Around You - Apostle Suleman (VIDEO)

2 Spiritual Sons Of Pastor Chris Oyakhilome Who Are Not From Nigeria.

Woman Who Convert From Islam To Christianity, Stabbed By Muslim While Preaching The Gospel (Video).

"If God Sees Everything, Why Did He Say Adam Where Are You?" -Apostle Johnson Suleman [Video]

The Lord Spoke To Me That I Should Take Justice If Anyone Comes After Me On The Media - Suleman.

"What King Solomon In The Bible Discovered After He Had Over 700 Wives" -Pastor Sam Adeyemi. 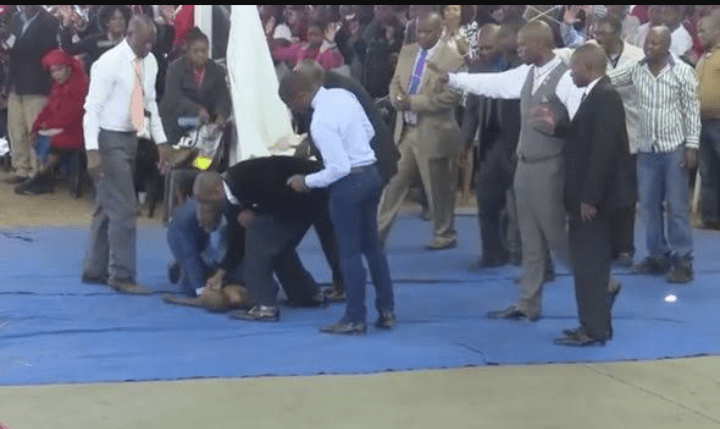 According to most South Africans, they spent a lot of money traveling to Nigeria to look for prophesy hoping that their lives would be better off but to no avail. They lamented that they will never go to Nigeria again to seek for prophesy except for official visits.

However, some also went ahead to say that South Africa have their own prophetic places of worships were people can go and look for prophetic Solutions to problems instead of traveling to other countries.

Before they turned into something else, a lot of churches were reaching out to people without collecting anything in return. Those early churches were not miracle churches as they focused mainly on soul winning instead of other things like touch and fall.

READ Also:  More than 20 Muslims Fulanis Convert To Christianity In A Small Village

They said all these touch and fall churches are common in Nigeria. So after watching them on TV’s that lured South Africans in search of miracles in Nigeria.

Related Topics:PastorsSouth Africa
Up Next